Just wondered is anyone has seen, bought, played this? 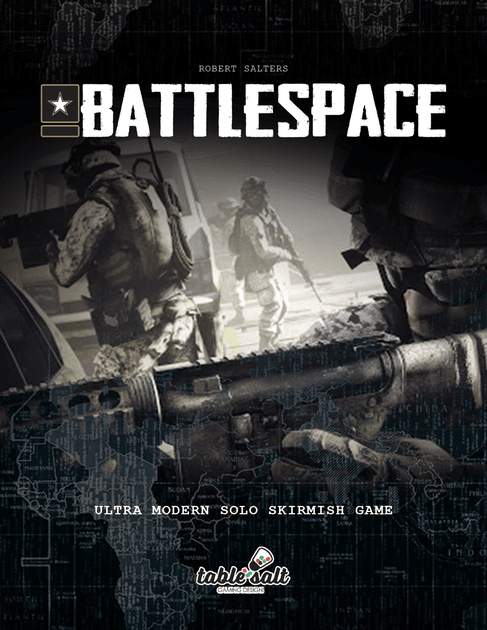 There is a run through of the game by the author here:

It is a solo skirmish game - Middle East ish based, although I could see easy adaptations for African, Trans Caucasus, Central Asian settings, and not so easy adaptations for other main force v insurgent guerrilla games. NI early 70s city actions are tempting but you are going to have to amend the free fire zone approach for NI and make provision for more civilian interaction including rioters. Maybe Tet Offensive city fights could work?

It is simple (trying to work out if it is deceptively so, or just simple) and fast playing. Designed for c20 max figs total (4 player driven soldiers and c10-16 enemy), 20-28mm on a 3x3ft board, it works well on 2x2ft with 20mm and obviously with any size figure with any suitably adjusted size space if you favour megalomania or miniaturisation. It is designed to run a 4 man squad through missions against a card programmed enemy.

I've said before I'm not too keen on card based systems and you could easily turn this into a chart and dice system, but in this context it worked well as a programming mechanism,

I've played the first mission through three times and I can see myself coming back to it for a quick not too taxing fun run through of an ultra modern scenario. There are 5 missions included in the rules - available from Wargames Vault as a download for $9 - and he is producing other missions, free to download from WV at the moment.

You can easily write your own missions.

It is solo, or cooperative. In coop mode you can split the squad into two man teams or run two squads. I see no reason on a big board why you couldn't run more than two squads through a city area quite easily - need more cards for activating enemy or that chart I mentioned earlier.

If you like hardware brochure differences this probably isn't for you, everything is so close you hit everything on the board with every weapon save hand thrown grenade. I'd make adjustment for side arms but not much else. One or two odd hanging ends but he answers questions quickly apparently (caveat: Facebook so not me he doesn't!) but I'm quite happy to fudge the few queries - like what happens to the mg42 that turns up but has no obvious difference from an AK other than being less accurate!

Users browsing this forum: No registered users and 5 guests